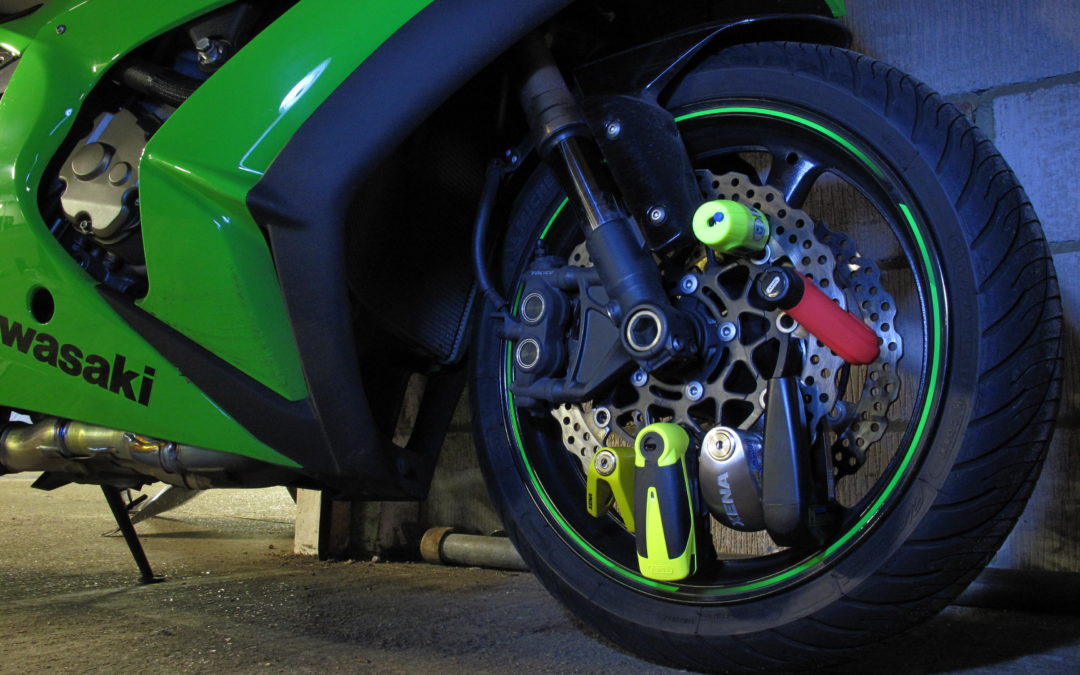 You’re twice as likely to have your motorcycle or scooter stolen now than you were 5 years ago. The risk is increasing daily.

Unfortunately no lock or chain on the market can resist a determined bike thief, but the object of locking your bike properly is to prevent them attempting to steal your bike in the first place. If they do want to steal it, your layers are then making them jump through as many hoops as possible in order to pinch your bike.

There are so many bikes out there with such poor security (see the image below, which I spotted in a London car park) that the reality is you’re probably not reducing overall two-wheeled crime by locking your bike up properly; but you are going to make the criminals pick an easier target.

Aim for 3 layers of security

Make your bike less visible, make it loud and make sure it takes as much time as possible for the thieves to try and steal it. Check out the simple steps below.

A bike cover is one of the cheapest and most cost-effective forms of security. In cities, thieves are spoilt for choice when it comes to the volume of bikes out there. They’ll have spotters who circle their local area, noting where targets are. If your bike is covered, they have to stop, take the cover off and check the bike out. They would rather not do this as it attracts attention to them, so a cover does a great job of keeping your bike off their list and under their radar.

We’ve picked this Oxford cover, which has a RiDE Best Rated award.

A disc-lock is a good portable bit of security that any motorcycle or scooter can carry. If you can, go for one with an alarm, as they are super-loud and will make a racket the moment your bike is meddled with. A quality disc lock isn’t invincible but will take a fair few whacks with a hammer or some serious time with an angle grinder before it can be removed. Thieves do not like to make undue noise and if they shake your bike to see what it has on it and the alarm sounds, they’ll think twice.

We’ve picked this Xena alarmed disc lock. It uses a 6mm locking pin, which will fit all motorcycles and nearly all scooters and will deter all but the most committed criminals. If you want a chunkier alamred disc lock, check out this Xena XX10 which will do the job nicely.

If you loop your chain and lock through your rear wheel and around your seat – therefore keeping it off the ground – you reduce the amount of tools a thief can use. Sledgehammers are of no use in this situation, meaning a thief needs to carry hefty bolt croppers or an angle grinder. Angle grinders are a potent tool as they are powerful but they make a noise and shower sparks everywhere. It’ll still take a thief a few minutes to cut through a chain with an angle grinder and for the thief doing the grinding, this will feel like a long time.

A quality hardened steel chain like this one is a great addition to any security arsenal as even though it can be cut, it will take time and add risk. Big chains are heavy and, we admit, they can be a pain to carry around but they play a vital role in enabling you to secure your bike to a fixed object.

If you have a scooter you can stash a quality chain under the seat. This is a top rated lock and chain but it is quite pricey for most. If you have a lower budget, this Oxford chain and Monster lock is a great option -it won’t be as hard to remove but it will add a vital extra layer of security.

Wherever you park your bike – if you can – lock it to something, so it’s harder to lift into a van.

If a thief needs to carry heavy duty tools like bolt croppers, hammers and angle grinders, they know they’ll instantly be done for ‘going equipped’ if they are pulled by the police. Although some won’t care, others won’t want to risk it. So by having this security you’re reducing the amount of scrotes out there who are prepared to take your bike on.

How not to do it

It’s easy to chuckle at this picture above  (I spotted this a London car park) but at least this rider is aware that security is important. They’re using an FD Moto alarmed disc lock – but as you can see, it’s not going to deter many thieves.

It’s a sad fact that one of our responsibilities is to ensure that our fellow bikers are aware of the risks of motorcycle theft and are using decent security. In this case, I left a note on the scooter to tell them to Google how to use a disc lock.

Security you can’t put a price on

There are other things you can do to reduce the chance of your bike being stolen.

Don’t leave your bike in an area that’s quiet overnight or at weekends. Industrial estates, underground garages, city-centre locations. Thieves absolutely love ‘private’ car parks because they know that you think they’re secure but they also know they can operate largely without being seen or disturbed.

Park it near CCTV. Much as we have all seen thieves pinching bikes in broad daylight and on CCTV, a lot of them steer clear of it. It gets in their way. They don’t know who’s watching it. They don’t want to be tracked. CCTV can be your friend.

Lock it to something solid or another bike. There’s no difference between one bike with £1,000 of security and another with none, if both can still be lifted into a van in seconds. If you can, lock your bike to something; a post, a ground anchor, another bike’s security chain. If you park out on the street, you can make your own deterrent by sinking a ground anchor into a bucket of concrete, making your bike that bit less mobile.

Park it in with other bikes. A busy bike bay may look like a target to thieves but they’d prefer your bike was on its own in a quiet car park. If you park it in a bike bay, cover it and use decent layers of security, your bike is likely to be passed over by the greedy-crooks.

Let the tyres down. If you rarely use your bike and worry about its security, then let the air out of the tyres. This will make the bike ten times harder to push and almost impossible for thieves to get it clear of the area using their preferred method of pushing it from another scooter.

Consider a tracker. Trackers cost from £20 for a basic one to £200+ and a monthly subscription. However, they can work well. A lot of thieves will leave a stolen motorbike in another location for 24 hours to see if it’s still there. If it is, they assume it isn’t being tracked and they’ll quickly wheel it to their main location. A tracker is a long arm you can extend to grab the bike back. There are lots of trackers on the market but the very cheap ones (under £20) are a waste of money – they just don’t work. However this portable tracker is new to the market and is getting great reviews. It can be setup in minutes and connects to your phone app.

Take photos of your bike

This won’t reduce the chances of it being stolen but it will help you if it does get pinched. Lots of people only have a distant and frankly not very good picture of their bike. If it’s brand new and it gets stolen, you can probably source images from the internet. However, nothing beats quality actual photos of your bike. The older a bike is, the more chances there are of it having unique identifying marks.

A friend of mine had her Audi RS4 broken into and the seats stolen. She identified her bucket seats in a Gumtree advert by a crease in the leather. When the police compared her pictures with the ones on the advert, they were confident she had identified her stolen seats just by that one photo. They then called the police in that area (it was halfway across the country), traced the seller, knocked on his door and he was caught red-handed.

Take good side-on images, front and rear shots and any pictures of defining marks or any aftermarket modifications. Thieves might change the bodywork colour or try and change the identity of the bike by fitting stickers but if you’ve got a picture of a distinct scratch on the swing arm, the tyres you fitted or a tiny heat mark on the exhaust, that might be the small clue that leads to you getting your bike back.

We won’t solve bike crime completely but we can do our bit. Please share this article on your social networks and help spread the word. Thank you.