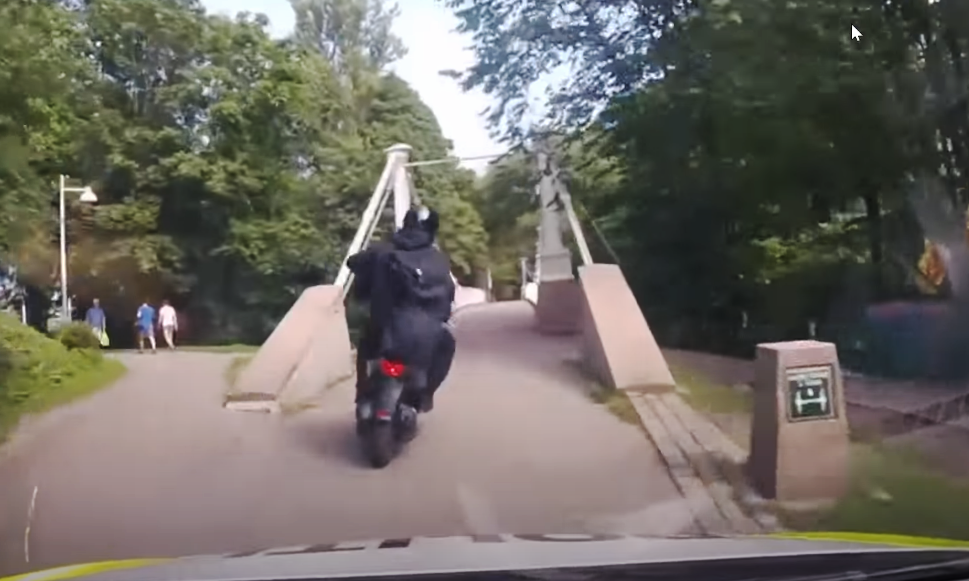 Check out the below video from Norway.

Police were called when two men forced their way into a jewelry store, waving guns and threatening the staff.

The thieves then smashed numerous display cases and loaded up a bag with expensive watches and jewelry.

They planned to escape on a high-powered scooter but the two police officers in this footage had other ideas.

As the police pursue the thieves, one officer asks: ‘Should I run them over?’, and another responds ‘Yes, yes, run them over’.

Motorcycle crime and ‘moped enabled crime’ has rocketed in the UK. As bikers we have been massively let down by the police.

The touchy-feely approach was never going to work. The weak response from the UK police and government has helped build a culture of motorcycle theft and motorcycle enabled crime that’s not going to go away any time soon.

The criminal community has had it too easy for years when it comes to motorcycles. They have been able to swan around on stolen bikes and know they’re going to get away with it.

Consequently, they’ve built networks where they can strip bikes, ship bikes out of the country, bypass immobilisers, steal bikes to order, run drugs and launder cash.

This action by the police in Norway is what the UK police should have been doing for the past decade. If the thieves knew they’d be chased, punted off and sent down, they’d start to back off the bike scene.

As it is, we’ll no doubt keep our liberal approach. These poor thieves have had a hard life of benefits, no jobs, no contribution to society. So we should just leave them alone and let them hold people up by knifepoint, steal other people’s means of getting to work and cause untold grief for victims. Yes, we shouldn’t chase them and catch them in case we upset their feelings.

The UK police, especially the Met Police, has lost the trust of a majority of bikers I know. It’s a good job the police in Norway are serious about fighting crime and catching criminals. UK police commissioners need to watch this video and grow some balls.