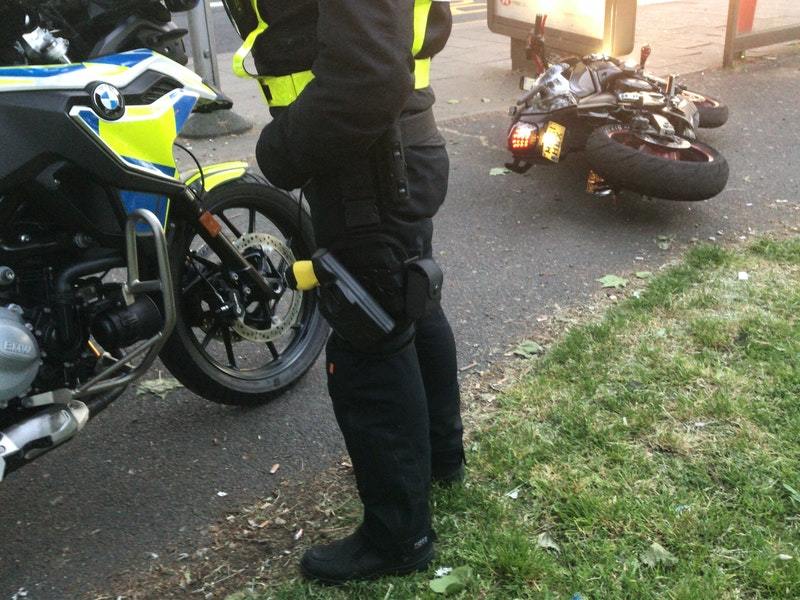 At approximately 21:20hrs, a number of high-powered motorcycles cut off at speed across the path of Venice officers in the Wood Green sector.

As units appeared on Green Lanes, now heading southbound, they could see that one of the high-powered bikes had a very small plate, which later turned out to be a fake registration plate.

Officers made progress in keeping up with the bike but were able to see that it was speeding and going off into the distance. Officers switched on blue lights and sirens to catch up with the rider but it started to accelerate.

As units were travelling east on St Ann ‘s Road, the motorcycle was travelling through multiple red lights on the wrong side of the road and riding at speeds above speed limits.

Speaking about the pursuit, the arresting officer, Police Sergeant Tony McGovern, said: “This was dangerous and reckless riding where the rider put himself and other innocent members of the public at risk of serious injury or even death.

“The rider was wearing a helmet but no protective clothing on his body and wearing shorts. As the pursuit continued all the way down St Ann’s Road the rider went straight through every red light that he was confronted with and rode on the wrong side of the road in his attempts to get away, sometimes mounting pavements.”

When the pursuit reached the A10 the motorcycle turned left, now travelling northbound towards Tottenham. As it continued north up the A10, Tactical Pursuit and Containment Cars (TPAC cars) lost sight of the motorbike but they had scrambled the police helicopter from the National Police Air Service (NPAS).

Seconds later, the officers heard that NPAS were now tracking the motorbike. It was reported that the bike was still being ridden dangerously and at speed. The NPAS operator had sighted the motorcycle on Lordship Lane and it was travelling at up to 70mph in a 20mph zone, and overtaking other vehicles.

NPAS also communicated that the bike was travelling at speeds of 100mph and generally continuing north.

PS McGovern, added: “This was highly dangerous and the rider was doing this without any police units anywhere near him and his actions were putting his own, and innocent members of the public’s lives in danger.”

Once on the M1 heading northbound towards Hertfordshire the bike was travelling at more than 150mph. As it continued along the M1 motorway, NPAS reported the motorcycle was riding at speeds of up to 130mph and entering Hertfordshire Constabulary’s jurisdiction.

The rider left the Hertfordshire district and entered Bedfordshire Police’s jurisdiction where NPAS reported the rider was hitting speeds of 180mph.

He then made his way into Buckinghamshire Police’s force area, where he rode the wrong way along the M1’s hard shoulder to enter a service station in order to refuel.

Op Venice officers managed to make it to the service station before the vehicle could refuel. Pursuit vehicles safely stopped the motorbike on the forecourt of the petrol station to prevent the rider from riding off.

He was taken back to a police station in north London and has since been released under investigation.

It’s worth noting that although the image above was issued by the Met Police as part of this story, the Yamaha XJ6 pictured lying on its side is clearly not the bike involved in the chase. Not unless it has a turbo fitted to it and the rider had neck muscles the size of an elephant’s leg.