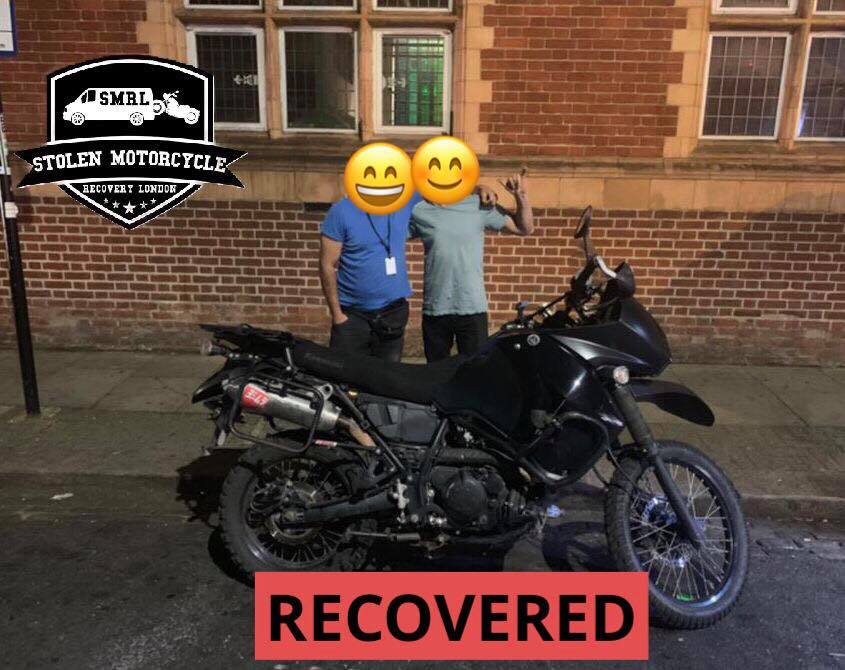 Stolen Motorcycle Recovery London was set up in May this year, by two bikers who wanted to do their bit to fight bike crime. With over 120 motorcycles recovered so far, they’re a huge asset to the London motorcycle community. Despite their efforts and their solid track record, they face a lot of red tape in helping recover bikes.

A few weeks back, the SMRL team recovered a bike that was ridden from Australia to London but then stolen right here in the capital. Thanks to the information they found on Bikers United, they could ID the bike and find the owner. We met up with the team to discuss the story.

Elliott from SRML: This was an interesting case, it got reported to us the same day we went to it. When we first got the pictures through, it looked a bit odd. One of our guys ran the VIN five or six times but it was coming up with no results.  It was really late, around 2am but we were heading in that direction anyway so we decided to detour to have a look.

The bike didn’t have a number plate on it. We were still having no results with the VIN; if it’s a foreign VIN it won’t show up on the system we have access to. We were fairly sure it was stolen.  However, if we can’t identify a bike, we can’t take it.

I realised they hadn’t sold this model in the UK and a lot of foreign bikes tend to be listed on Bikers United.  We Googled the VIN and sure enough, it came up on Bikers United and gave us the Reg which was really useful.

At that point we were sending messages to the owner through the Bikers United contact form. I then put the Reg on Facebook and sure enough it came up with the post from the victim saying his bike had been stolen.

We spoke to the police however due to the fact it was nearly 3 in the morning, they were not keen to assist as they don’t want to call people at this time. However, an attempt would have been appreciated.

We finally got contact from the owner who couldn’t believe we had found the bike; the owner was currently away in Spain but he and the police gave us permission to lift the bike.

We took it to him the next day when he arrived home.  The bike had spent ten months being ridden from Australia to the UK, the owner and his brother had identical KLR’s and were riding out from Australia.

The bike had some damage and had been ragged around, but the owner was still happy to have it back.

In the meantime, the owner had bought another bike as he had another tour of Europe planned but at least the thieves no longer had it and he could replace the parts that needed to be.

We think the team that stole it are a team we are starting to get to know, it had been stolen a mile away from where we found it in Tooting.  It was stolen from outside of a house, disc locks removed.  It had several disc locks to remove and we believe they were removed outside of the house before they pushed the bike away.

This bike had been missing for around a week or two. We try to aim to have bikes returned within hours or a few days. We were really happy; this is one of those that was really interesting.  The bike had a lot of sentimental value and it’s kind of embarrassing that we have criminals ragging these bikes around when there is such a story behind them.

There have been a couple now that we have recovered bikes through Bikers United. There was a Triumph that had been parked up in a bay, someone had contacted us, we ran checks and confirmed it had been stolen.

We managed to identify it through Bikers United but, again, the owner was on holiday.  The weak link in these stories is that people have to answer the phone; if they don’t then the police have to seize the bike which means the owner has to pay to have it recovered.

The police cannot allow us to take it if the owner doesn’t pick up the phone.  We try and tell the police to stop calling people on a withheld number as people don’t always answer.

But this KLR was a good one. It was a nice end to the fifth bike of the evening.  It allows us to publicise something people can really relate to, rather than just hearing of another nameless person that has had their bike stolen.  People can hear how personal it is to the victims.

Also, the VIN number is important over just the Reg as on this bike there was only a small amount of the number plate available and it wasn’t clear. Often thieves rip the plates off or they use plates from another bike. Being able to Google the VIN meant we could find the listing on Bikers United.

The SMRL team are aiming to raise £3,000 to fund a newer van that’s ULEZ compliant so that they can continue to operate in London, recovering stolen motorcycles and reuniting them with their owners. To show your appreciation, click here.