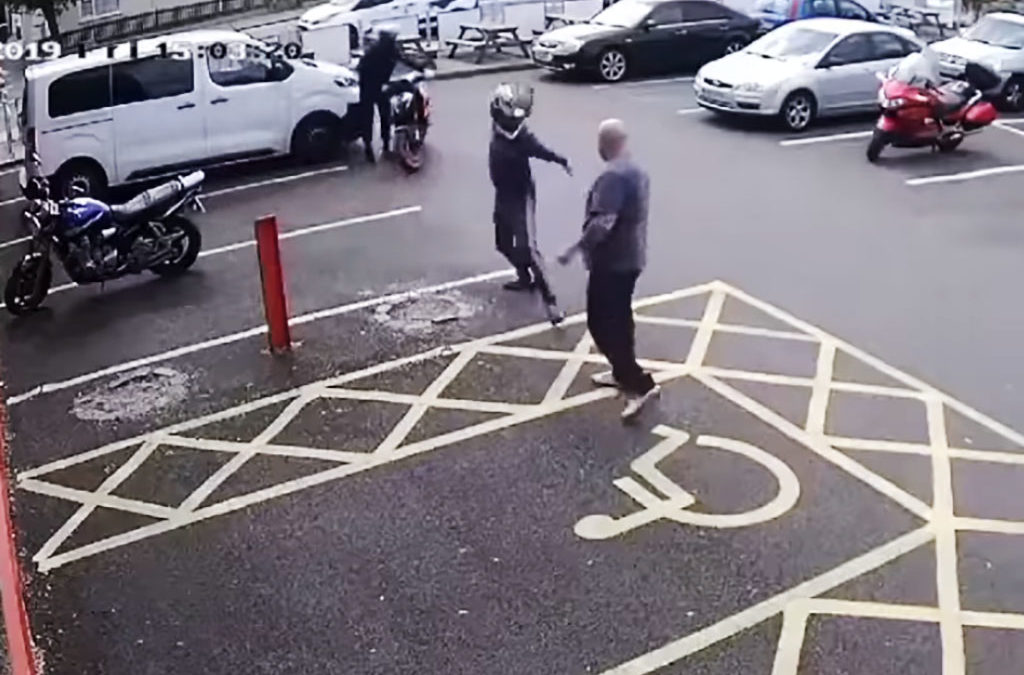 A 19-PLATE KTM Super Duke R that was just two-hours old was stolen from outside motorcycle shop CMC Cannock today.

The bike’s owner had picked up the 0-mile bike just two hours earlier and was visiting CMC to buy some new parts.

CCTV footage shows 4 thieves ride into the CMC car park on two motorcycles. One of the thieves dismounts and checks out the bike but the gang look to have bottled it as a member of the public approaches the remaining three.

After a short exchange of words, two of the thieves drive the passer-by away by threatening him with a hammer, while another other breaks the KTM’s steering lock. The brave member of the public can do nothing as he’s un-armed but being swiped-at by a scumbag with a hammer.

It is alleged that this isn’t the first motorbike to have been stolen from the CMC car park this year.

Local Stolen Motorbike Recovery groups are tonight out looking for the bike and the bike’s thieves, following a tip-off, naming a known local bike thief.

This theft proves how vital it is that you never rely on just your steering lock. It takes no time to fit a disc lock and wards off a majority of thieves who would rather target a motorbike without one. This is our suggested pick for a quality low-cost disc-lock as it can also be used with a chain, on the front brake disc or through your rear sprocket.

I am genuinely gutted for the owner. I hate seeing bike thieves making a few thousand quid in just a couple of seconds. It’s fair to say if a quality disc lock was used, the thieves would have left for an easier target.