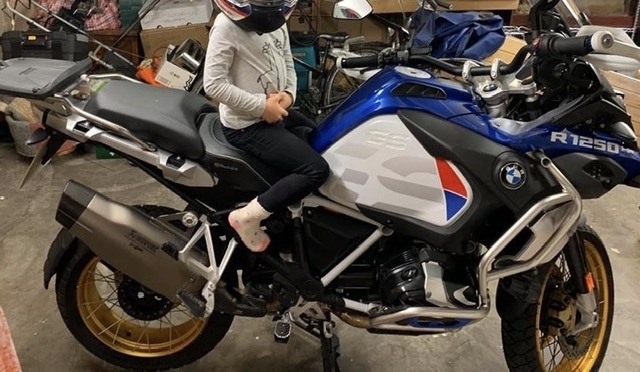 £5000 Reward for info leading to the return or conviction of the scumbags who stole my new R1250 Adventure Rallye HP motorsport white and blue BMW Reg 58 NR from Kew Riverside underground car park early Saturday morning They cut through a Pragmasis 19mm D ground anchor which requires power cutting twice they then removed the tracker before I assume bundling it into a van so this was a professional crew of scumbags. It had a Wunderlich riders seat, and Cruise control. Shad topbox BMW extender side boxes which had Wunderlich luggage carriers attached so quite distinctive An innovv K2 front and rear camera recording system. The bike and parts are very distinctive in that it has the full HP 719 Billet Pack engine covers foot pegs gear and brake levers Mirrors and an HP silencer There was a brand new Arai Tour-X 4 in the top box with BMW Atlantis gloves and a pair of Rukka Claw winter gloves also new. It’s likely it will be broken up for spares so if anyone hears of cheap BMW Bike or spares I would really appreciate you getting in contact.

Taken from underground gated carpark. Pragmasis ground anchor cut in two places and tracker removed at point of theft and left on the ground. Assume then bundled into a van. Probably early hours of Saturday morning.